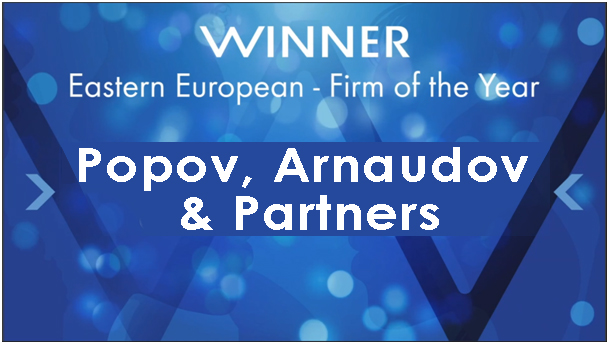 International Financial Law Review analyses the global legal market and opinions for lawyers working in capital markets, corporate law and finance. First published in 1982, the publication is a source of information on trends and strategies in corporate finance.

The “Women in Business Law Awards,” organized by IFLR, aim to recognize leading ladies for their contributions to the development of business law, as well as law firms that have developed the most progressive diversity and inclusion initiatives from around the world.

An expert nomination was received by Lawyer Sibina Eftenova, Head of Commercial Law and Regulation, who was nominated as the European Lawyer of the Year in the area of Project Finance.

Popov, Arnaudov & Partners as an organization has been recognized in several categories. In addition to the Eastern Europe Award, which it won, the Firm was nominated for 3 other awards. The nominations are based on the firm’s policies and initiatives in the areas of people management, mentoring, work-life balance, grant support for projects and human rights initiatives for the LGBT community and vulnerable groups. Five of the firm’s eight partners are ladies, including Lawyer Sibina Eftenova. The winners in each category were announced during a virtual ceremony on 24.06, with Popov, Arnaudov & Partners receiving the Eastern Europe Law Firm of the Year award.